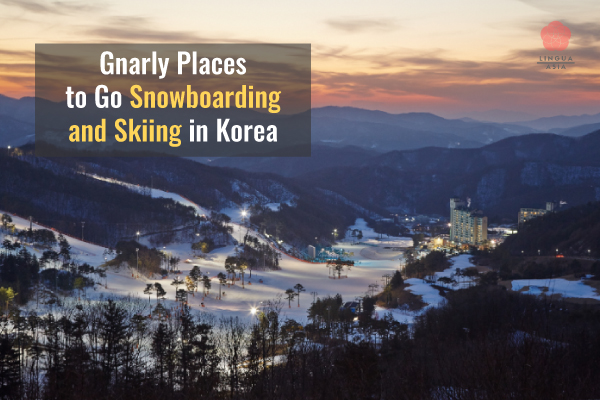 Winter in Korea is rough for expats.

But, it’s a lot of fun if you’re visiting, especially from a tropical country like Singapore.

Either way, it’s a great time to snowboard or ski!

Nothing better than some fresh air and powder to ward off cabin fever.

Korea is 70% mountains, so there’s bound to be a few places where you can strap a board or some planks to your feet and slide down.

Whether you’re traveling to Korea for some fresh powder, or you need a break from Seoul, snowboarding or skiing is the way.

It’s never a good idea to generalize, but Koreans can snowboard.

While surfing is still new to the country, they’ve been shredding the slopes for a long time.

It’s practically ingrained in their culture, what with all the mountains. Most unis offer one-month snowboarding/skiing retreats, even the non-fancy ones.

I prefer surfing over snowboarding/skiing. But, in Korea, I prefer boarding over surfing.

Because there are way more options and a built-in culture.

The first time I went snowboarding was with a group of Korean Americans in California.

They started me out on the black diamond slope since that was how they learned from their father, and how he learned from his.

Needless to say, it was less carving and more rolling down the mountain.

The next time I went was at Vivaldi Park in South Korea. I was determined to do it right, so I started out on the bunny slope.

I was able to leaf my way down eventually and got pretty confident.

My companions were of course shredding or whatever they say in Korea.

I succumbed to peer pressure halfway through the day and joined them on the expert slope.

It was going pretty well, until about midway when I was unable to stop and fell flat on my tailbone.

Fortunately, the other riders were actually experts and swerved to avoid me.

One actually had to jump over me, so I take solace in the fact that I provided a nice obstacle for the experienced boarders that day.

And experienced they are. It’s common for people of all ages to hit the slopes in winter.

There are beginners, but they generally stay in their lane on the easier courses. I just happen to have some friends who secretly resent me.

So fear not newbies, they have plenty of instructors and facilities suited to your level.

There are dozens of ski resorts in Korea. To most, they’ll seem same-same but different.

The runs can feel a bit artificial, like you’re in a simulation.

There’s not much variety when it comes to slopes, so day trips are enough for most resorts.

The interesting thing about Korean ski resorts is that the larger ones have water parks next door (they’re like a spa for the whole family or big jacuzzi with water slides!), golf courses and sometimes casinos.

Read on to find the ski resort in Korea for you.

Quick tips for snowboarding/skiing in Korea

Go early or late on a weekday to avoid crowds

Check when the season actually starts before you go. It’s different for each resort and the info online is in Korean buried in a Naver blog.

It actually doesn’t snow that much in Korea, so most snow is artificial and tends to be icy

Whether you prefer the tray or the two planks, you can rent everything in Korea including ski wear

It’s a good idea to bring a change of clothes and socks, especially if you’re a beginner, because you’ll get wet

Whereas with activities like surfing where beginners and pros are all riding the same waves, snowboarding allows for you to be among similar skill levels

I’ll start with the most popular ski resort in Korea. This place has it all including a waterpark, golf course and casino, because, why not?

Located in Jeongseon, Gangwon-do, it’s said to have the best slopes and snow quality.

High1 has 21 slopes and tons of activities for the whole family.

There’s a wide-range of beginner to expert runs.

Keep in mind that all the slopes merge into the beginner course which causes a traffic jam.

The 2nd most popular ski resort in Korea.

Vivaldi Park is located in Hongcheon-gun and is another good choice for families.

There is an abundance of hotels, restaurants along with a waterpark and an amusement park. There’s even a prayer room and halal restaurant for Muslim visitors.

There are only 12 slopes, so it feels less like a place to snowboard or ski and more family focused.

Vivaldi Park is a good place if you don’t mind crowds and can speak Korean.

Phoenix Pyeongchang is the right venue for serious snowboarders.

Like the other mega resorts, it has everything from an Olympic course to a sledding range for children. There’s a waterpark, golf course and enough accommodations to house a small town.

Phoenix Pyeongchang, the official venue for the Pyeongchang Olympics, has 21 slopes, 6 freestyle courses and an Olympic snowboarding half-pipe.

Given the distance from Seoul and variety of activities, you just might want to stay the night in one of the condos, villas, hotels or resort.

Monapark Yongpyong is a bit further than the other entries, but it’s a solid choice for experienced riders and skiers.

With 28 slopes, it has the most variety, so you can stay the night and not get bored. It’s one of the furthest from Seoul, but there’s tons of parking if you decide to drive.

​The slopes are a bit narrow and the buildings are a bit older though, so manage your expectations.

What Bears Town lacks in size and safety, it makes up for in location and price.

Just an hour bus ride from Seoul, it’s perfect for a spontaneous getaway, especially if you have kids. This resort is great for sledding!

Don’t let the adorable name fool you, there’s some decent boarding to be had. With 11 slopes, it’s sure to keep you entertained for a day.

This bear-themed resort is a bit quieter than the others, so you can have a more relaxing time.

Make sure to use a rental shop outside the park for a discount on gear and lift tickets.

The only catch is that it’s in North Korea.

Constructed in 10 months by conscripts of the Korean People’s Army with the hopes of hosting some of the Pyeongchang Olympic events, this ambitious project could be a great place to snowboard or ski in the future.

As of now, the equipment, including lifts are European hand-me-downs that have passed through China first.

You might want to wait a bit before buying a season pass.