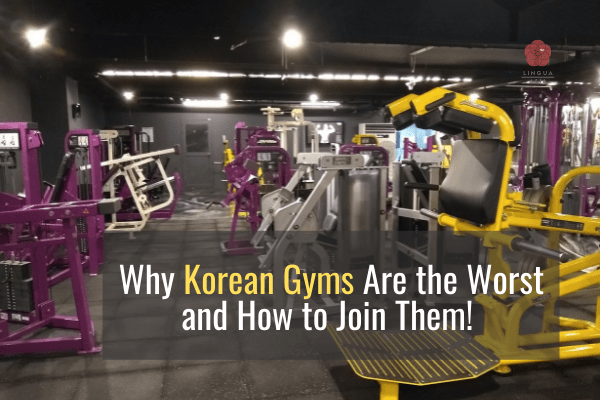 Why Korean Gyms Are the Worst and How to Join Them!

This post covers the nitty gritty of why Korean gyms are awful and how you too can experience them.

I’ve tried gyms in 25 countries on every continent, which has gradually lowered my standards over the years.

Find out why Korean gyms need to do better.

Korea has a lot of things I like, but gyms aren’t one of them.

This isn’t one of those cutesy articles where they say something negative in the title, but then gush over how great it actually is.

Korean gyms really are that bad, and we like to keep things positive here.

Why are Korean gyms the worst?

Korea combines the worst of all worlds when it comes to fitness centers.

Yes, I’m sure the gym culture in Kabul isn’t what it once was, but they probably don’t charge 100 dollars a month and blast off-brand K-pop at full volume. I still stand by my statement that Korean gyms are the worst.

For reference, even the gym I joined in Marrakesh, Morocco was better than anything I’ve tried in Korea. And Morocco isn’t known for its gym culture.

Why should I join a gym in Korea if they’re so terrible?

Because it’s still the best way to stay healthy in a country where drinking is considered an activity. You can’t buy health, and it has a huge impact on every aspect of your life.

There’s exercise equipment in most parks, but the level of fitness you can get from them is only so high. The average apartment size will also limit how much equipment you can fit, if you opt for the home gym route.

There’s no substitute for regular access to proper gym equipment though, and sometimes the juice is worth the squeeze.

How do I join a gym in Korea?

It’s pretty easy to join one, as long as you have a phone number, some money and the patience of a saint.

They’ll ask if you want to pay at once (일시불) or if you’d like to divide payment (할부). Both options have their pros and cons. I always just paid cash for no longer than a year.

What are the rules at Korean gyms?

You have to change your shoes at Korean gyms, which I wouldn’t mind if they actually cleaned the floors.

You also have to wear a swim cap at the pool.

They often expect you to know these, and don’t always explain them when you join.

That’s it. Anything goes at a Korean gym. You don’t have to wipe down equipment or rerack weights. You don’t even have to wear shoes. It’s a literal free for all.

“Body Profile” (or 바프 ba-peu) is trendy in Korea as a bucket list item, especially among the MZ generation.

You’ll see a lot of Korean girls in “leggings” going on an extreme workout routine and starvation plan for a few months (usually with a trainer and 1,000 calories a day) and stop once they take a body profile pic for Instagram. Then they’ll ultimately end up back at where they were in the beginning.

They also use InBody to check fat percentage and muscle composition. These are inaccurate at best, so feel free to disregard them.

How do I deal with gyms in Korea?

There’s no easy answer, but I have a few suggestions:

My experience with Korean gyms

The first gym I joined was in Yeouido in 2006. It was actually ok, besides the fact it cost 100 dollars a month and was the size of an apartment fitness center in Thailand. Everyone wore matching uniforms provided by the facility that were not flattering. The equipment was mostly Nautilus models from the 70s, which worked fine, but not worth the membership fees. They also had multiple vibrating exercise belts, which were quite popular with the octogenarians who made up the majority of the clientele. Most guests would come in, sit on an exercise bike while reading the paper, then hang upside down for 15 minutes on an inversion table.

Fitness has always been a part of my life. I even worked for a brief period of time as a trainer. I have a modest home gym, but there’s only so much I can do there.

I’ve tried fitness centers at every price point from hole-in-the-wall gyms with equipment sporting frayed cables that required a tetanus shot afterwards to 200 dollar a month gyms that cater to the crème-de-la-crème of society. None of them would be worth joining overseas.

In fact, if a Planet Fitness ever opened up in Korea, you’d find me there happily munching pizza on a treadmill.

It might be the actual gym owners who are the problem. About half the places I’ve been to changed ownership or went out of business. My girlfriend at the time didn’t bat an eye while suggesting we go down there and take some equipment as compensation for membership fees that wouldn’t be reimbursed. This must be a regular occurrence.

Gym owners often closed down shop in mid-summer to renovate, which is like shutting down a ski resort in winter. I get a feeling they aren’t the sharpest pennies in the fountain.

My friend even joined the now defunct California Fitness chain in Gangnam, which was supposed to usher in a Golden Age of Korean fitness. He paid a few grand for a two-year membership, only to have them cut and run with the money.

I left Korea for 5 years and returned when the pandemic hit. I noticed how buffed up some people had become since weightlifting became trendy while I was away. I had a brief moment of hope that gym quality had improved as well. There are at least double the number of places now. But alas, they’re still terrible, there’s just more types of terrible to choose from. To use a very current reference from the 2004 movie, Dodgeball, I’ve found that they’re either run like Globo Gym with pretentious staff, but without the cool equipment or facilities (some even have chandelier for some reason). Or, they’re Average Joes Gym without the lovable staff and clientele.

One thing that did change was the use of risqué, heavily-photoshopped profile pics (바프) of trainers in marketing material. I’m sometimes unsure if I’m going to a coed strip club or a gym when I enter the building. PT (personal trainer) became popular, but is more of a masochistic status symbol. Trainers tend to overwork beginners with questionable exercises like jumping squats (with the Olympic bar and plates of course), and unrealistic diets until they hate going or get injured and stop.

If you do happen to find a decent gym in Korea for a reasonable price, cherish it. You don’t know what you’ve got till it’s gone.

Let us know your awesome experience with Korean gyms in the comments!