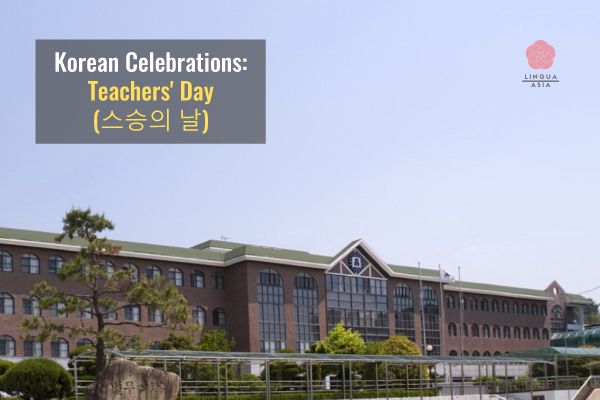 Teachers are kind of a big deal in Korea. On top of being respected and well-paid, they also get a special day just for them. (✿◡‿◡)

Teachers’ Day is a time to show appreciation for how they shape young minds, the future of society.

But, it’s changing every year. Find out why it’s important and how it’s different now.

When is Teachers’ Day in South Korea?

Teachers’ Day is May 15th every year in South Korea. It’s a day to show appreciation to teachers and load them up with bri…err..gifts.

Some teachers used to get a lot of gifts and even cash as bribes in the 1990s. ⚆_⚆) Why bribe a teacher you may wonder? It’s to give your child more attention and favorable treatment; so they get a higher class score (내신) and go to a better uni; so they can make more money and take better care of you when they get older. The circle of life in Korea. This completely ended with the Kim Young-ran Act (김영란법), Anti-Corruption and Bribery Prohibition Act, which took effect September 2016. You know things got real if they made an act for it.

More about teaching English in Korea

So…. You would’ve received a lot more stuff if you were a teacher in Korea before 2017.

Wait! There’s still good news! Schools usually finish early this day around noon. You’ll also get flowers🌹 and thank you letter from students. Maybe a small gift under 50,000 won too.
💡 I asked my oppa who’s a teacher and he said elementary school teachers don’t receive gifts at all. This became the new culture according to him. The plus-side is he doesn’t have to buy the principal a gift anymore on Teacher’s Day, so a better deal all around for minimalists.

📃Korean students will most likely write you a “롤링 페이퍼 (Rolling Paper, not to be confused with something else overseas)”, which is a Konglish word for a big piece of paper where everyone in class writes a short letter to you. Super sweet.

Why are teachers a big deal in South Korea?

Well, Korea is a small country that lacks natural resources, unless you count mountains. All we have is… People!

Koreans have been valuing education above all else. Perhaps a bit too much as shown in K-dramas such as Sky Castle where they obsess over suneung. As soon as a Korean becomes a parent, they instantly catch “education fever (교육열)” and morph into tiger moms. So, teachers naturally became very important in this equation.

Also, after the IMF crisis from 1997 to 2001, Koreans switched their focus from flashy corporate gigs to secure jobs where they didn’t need to worry about being laid-off. Together with public servants (공무원), being a teacher became popular due to the aforementioned well-paid salary and respect, not to mention actual vacations longer than a few days. These jobs are affectionately called “철밥통 (cheol-bap-tong)”, which literally means “iron rice container”, meaning a stable job where you’d never go hungry.

Why do Koreans celebrate Teachers’ Day?

Korean kids spend a lot of time at school, perhaps too much. Not so long ago, teachers were almost equal to parents in a child’s life. So, Koreans celebrate Teachers’ Day to repay their kindness (or 은혜, grace).

But honestly, I only celebrated Teachers’ Day because everybody told me to do it, not out of respect. ( ͡ಠ ʖ̯ ͡ಠ) Because there’s always good ones and bad ones.

A little bit of history:

May 15th is the birthday of King Sejong the Great (세종대왕).

Since King Sejong invented Hangeul and educated people like a teacher, he’s the most respected king in South Korea.

Teachers’ Day was made with the hope that teachers can be respected like King Sejong.
Wohh… Whoever thought of this must’ve dreamed big. ⚆_⚆ Literally, the one and only undisputed king of Korean history that covers just 5,000 years.

What do Koreans do for Teachers’ Day?

Korean students will get excited for this day.

They’ll fill up a chalkboard with congratulatory messages of thanks and love in the homeroom (or give you cards).

They’ll also give you flowers and sing a song for you. This can get a bit awkward if you don’t like the teacher or vice versa, but is mostly good fun.

What is the Teachers’ Day Song in Korea?

You can probably guess by now that yes, there’s a song for Teachers’ Day!

The lyrics in Korean go:

You don’t need to worry about buying a gift for Teachers’ Day anymore. Now it’s recommended to not give presents in Korea.

But anything goes in other countries. Check out our post about 17 Korean Gift Ideas for each Holiday and Occasion.

Let us know your thoughts or questions about Korean Teachers’ Day in the comments!