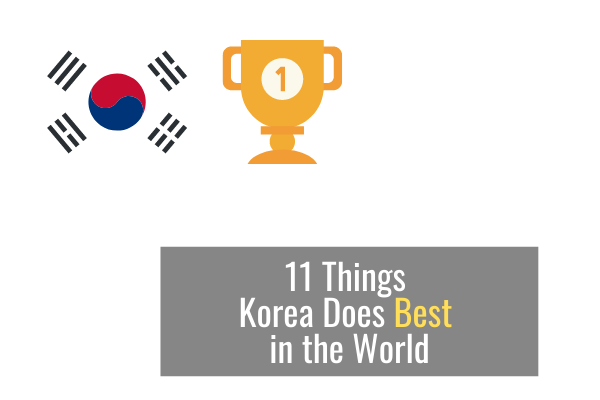 Koreans are overachievers in more ways than you’d expect. This post is all about the things Koreans are undisputed champs at.

You’ll find out what they rank first for in:

Let’s see why South Korea truly is the Best Korea!

South Korea is a one-of-a-kind country.

Here are the things Koreans are awesome at.

They have the longest combined total weeks at No. 1 (244 weeks) in the Women’s World Golf Rankings, as of November 2020.

This includes Inbee Park who ranked first in the world for 106 weeks, Ko Jin-young for 74 weeks, Jiyai Shin for 25 weeks, Park Sung-hyun for 20 weeks, and Ryu So-yeon for 19 weeks.

No one’s quite sure why this is, but I suspect it’s because golf is considered a prestigious sport, and Koreans don’t mind the hours of repetitive practice it requires.

The bow and arrow were the weapon of choice during the many wars in Korea. It can be argued that archery is in our blood.

The Korean archery team has been winning gold medals at the Olympics since 1988. Korea also has the most successful athletes in Olympic archery since 1972 by medals won.

Koreans say, “it’s harder to become a member of the national team than it is to win a gold medal”.

Also, it doesn’t hurt that you can find archery cafes all over Korea.

This one may come as surprise.

In 2018, Korea ranked first with 9.5 million (45%) shipbuilding orders. Although Korea lost its top spot to China for a few years, South Korea took it back and is currently number one.

Electronics are a big deal in Korea.

In the global DRAM (semiconductor memory) market, Samsung Electronics and SK Hynix in 1Q 2020 ranked first and second at 44.1% and 29.3% respectively. The combined share of the two companies is 73.4%.

According to Strategy Analytics, Samsung Electronics produces 49% of the smartphone memory semiconductors in the 1H 2020. This means half of all smartphones in the world contain Samsung semiconductors.

They watch the most movies a year (4.37 average number of movies per capita) in the world, exceeding Iceland (4.2) recently.

According to the 2019 Korean Film Industry Report by the Korean Film Council, the total number of moviegoers reached 226.68 million, a 4.8% increase from the previous year. Sales were the highest ever at 1.9241 trillion KRW, a 5.5% increase year-on-year.

Koreans simply enjoy going to the movie theater, alone or with a date. No matter how busy they get, there’s always time to see the latest blockbuster or domestic film. Using the unique point system in Korea, watching movies can be affordable.

According to data from the Economist Intelligence Unit (EIU) in 2019, Seoul, Korea had the most expensive bread in the world at $15.59 per kilogram of bread. Bread in Seoul is 1.9 times the price in New York and 2.8 times that of Paris.

Unless you use dial up internet, you probably know that Koreans dominate online games.

In fact, they bring in the most prize money for online games in the world. The top earner so far is “Faker”, Sang Hyeok Lee, at 1.26 million USD as of September 2020.

Korea has the fastest mobile (cellular only) download speed according to the Speedtest Global Index.

As a Korean who’s obsessed with speed, I can’t stand buffering. Perhaps this is the main reason for fast internet in Korea.

As shown in Korean Statistics, Korean girls are ranked 1st in Mathematics (PISA) among OECD countries.

South Koreans have a 69% attainment rate of tertiary education (undergraduate and graduate level), the highest rate among OECD countries.

Koreans love to travel. There’s an airport for nearly every major city, and some that don’t even need one.

They also know how to manage them.

Let us know which one was most surprising in the comments!