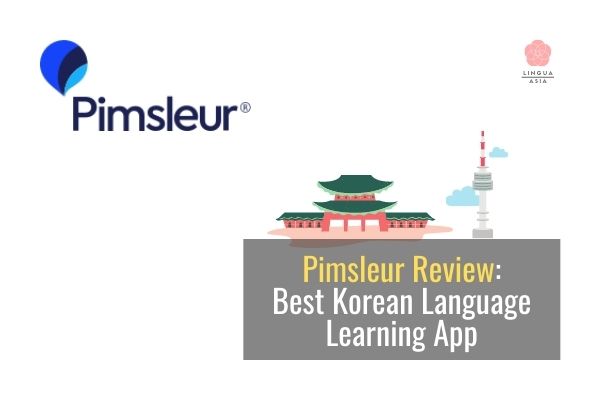 You may have noticed we’re pretty big on Pimsleur here.

The main reason being it works.

Pimsleur is especially effective for East Asian languages like Korean and Japanese, which are tough for English speakers.

Learning a second language is a lifetime endeavor. There’s no magic bullet.

Pimsleur is a specialized tool that helps jump start your journey and saves you months of frustration.

Here’s a personal review of the Pimsleur app.

There’s so many language courses floating around, and I’ve tried many of them (that Duolingo Owl sends me passive aggressive emails to this day).

You can pick up a word or phrase here and there, but without reinforcement or structure, you’ll find yourself going in circles.

I started learning Korean this way when I moved to the country in 2006.

In two years, I became fluent in the language after a lot of wasted effort and the advantage of immersion.

Then, a high school friend invited me to his wedding in Japan in 2008. It was in four months and I wanted to make an impression on his family and friends. I found Pimsleur’s 90-day Japanese course and thought, why not?

The format surprised me since it was so unnatural and somewhat robotic. I basically had a conversation with a recording everyday for 30 minutes. I felt like a spy training for a deep cover mission. It was tedious at times and I skipped few days here and there, but stuck with it until the end.

At the wedding, I completely wowed my Japanese friends. I was able to ask and answer simple questions effortlessly. It was like how Jason Bourne was unknowingly programmed to speak a bunch of languages.

In three months, I became conversational in a language I had little experience with. I gained a solid foundation to build on and the confidence to do so.

I thought about how much time I could have saved if I had done the Korean course before coming to the country. That’s one of the main things I’d do differently.

Since then, I spent 6 years slow traveling the world and used Pimsleur to learn other languages (they have 50). I’ve experienced minimal language barrier and have impressed people from Turkey, Spain, Portugal and to a lesser extent, France.

Pimsleur isn’t a magic bullet by any means. It’s similar to following a fitness regime. You get what you put in and it works. And it will make you conversational faster than anything I’ve tried. You won’t be confused with a native speaker, but you’ll be on your way to fluency.

With the speaking, vocab and reading lessons on their new app, Pimsleur will take you even further.

WHY you should choose Pimsleur

WHY you shouldn’t choose Pimsleur

Pimsleur came out during the age of cassette tapes in the 80s. It was based on the work of Dr. Paul Pimsleur, a pioneer in the field of Linguistics and Psychology in the 60s-70s who saw the need for self-study language learning. He created a program for Modern Greek that taught people using simulated conversations.

Simon and Schuster bought the program in the 90s and gave it a face lift over the years, making the wording more natural and adding 50 languages.

Now, Pimsleur has upgraded to an app with engaging exercises that offer reading, comprehension and vocab lessons in addition to its revolutionary core program.

How does Pimsleur Language Program work?

If you’re using the audio only, it starts with a short conversation about daily life. The topics are practical and can be used right away.

You are then directed through listen-and-repeat and call-and-response patterns to learn each part of it. You’ll start by simply repeating words and then sentences followed by the questions. Then the recording directs you to answer the questions as if you’re talking to it. You’ll hear both male and female voices, so you can get used to their speaking styles.

At the end of each lesson, you’ll be able to have the conversation you listened to!

Lessons cover helpful topics like greetings, making plans with others, ordering at a restaurant and giving your opinion. Each lesson builds on the previous ones and forces you to recall things you’ve learned. At the end, you’re ready to face people and talk to them because you’ve already had similar conversations.

These can get tedious, but the program works. Taking a few days off once in a while is fine as long as you complete it. The app version saves your progress, even in mid-lesson, so you can just pick up where you left off.

They’ve also added some features to break up the monotony as well. You can now do some Duolingo and Rosetta Stone-esque exercises like flash cards and matching.

What features does Pimsleur come with?

Each level comes with 30 lessons that build on each other. The lessons on the app now include:

These are fun ways to break up the lesson and reinforce things you’ve learned.

What are the prices and options for using Pimsleur?

There’s a monthly subscription price now for $20.95. It gives you full access to all 51 languages.

You can also try it out for free for 7 days.

Where can you get Pimsleur lessons?

You can go to the Pimsleur site and get started immediately. There’s also a mobile app version you can download.

Is Pimsleur worth it?

I’m a bit biased because it has worked for my partner and I. Pimsleur isn’t the cheapest program out there, but it’s the most effective for beginners looking to start listening and speaking a second language. You don’t always get what you pay for in life, but Pimsleur is worth every penny. If you’re unsure, you can check out the free trial to see if it’s right for you.

Let us know your thoughts or questions about Pimsleur in the comments!