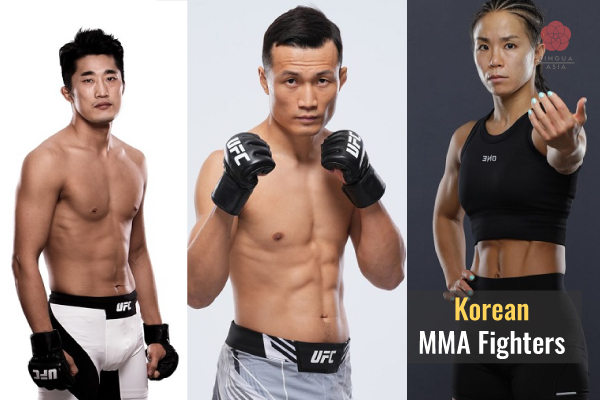 Korean MMA fighters have been a force to reckon with for nearly two decades.

Here are the best ones in the UFC along with some you haven’t heard of!

Just like Michelle Waterson, Seo Hee Ham is another case of being undersized for most of her career.

Even at a size disadvantage, she managed to get a win over Courtney Casey in the UFC, who’s a tough out for anyone. Seo Hee Ham was released from the organization after two losses in a row.

Nicknamed “Hamderlei Silva” early in her career for being aggressive, she’s still fighting and has been quietly undefeated for the last 5 years in Rizin and One Championship.

Seo Hee Ham has improved tremendously from being a straightforward brawler with a mean straight left to developing good footwork and feints.

Capturing a One Championship title would be a perfect way to cap off her career.

One of my favorite Korean fighters stylistically to watch, Kyung Ho Kang has great creative striking and grappling that he blends well.

He’s one of the more versatile fighters on this list with some good wins over Guido Canneti and Brandon Davis.

Kyung Ho Kang has been in the UFC since 2013 which is a feat in itself, but has yet to string together more than 3 wins at a time, which would help justify title contention.

Probably the heaviest handed of the Korean fighters, his size and power made up for his lack of technique.

He put on some great fights in the UFC against Neil Magny and Mike Perry that ultimately ended in knockout losses, leading to his retirement.

Some feints, striking variety and lateral movement could have easily got him into the top 10.

A lot of the top Korean talent is getting scooped up by ONE Championship these days. Rae Yoon Ok is the most talented among the bunch in my opinion.

Decisioning an older Eddie Alvarez and a streaking Christian Lee for the title is no small feat.

Rae Yoon Ok has good fundamentals and all the talent, but his inability to clinch when he’s hurt lost him the One Championship title.

One of the biggest “what ifs” in MMA history.

A young, good-looking, likeable knockout artist who was developing a massive fan base, cut down in his prime.

His career is also one of the worst cases of mismanagement and botched coaching I’ve ever seen. In fact, it pushed me to write this article in the first place.

After a 6-year undefeated streak, they matched him with Cub Swanson, someone you should never stand and trade with. Denis Bermudez was ranked slightly ahead and would have been the perfect step up in my opinion.

The game plan against Cub is take him down and smother him a la Frankie Edgar or circle at kicking range and look for chances to counter. You should never stand in punching range with him. He has too much power. Guess where Doo Ho Choi stays?

It was a banger of a fight for a few rounds, but then became painful and frustrating to watch as Swanson tee’d off on Choi, who fought back valiantly. The corner should have stopped that fight in round 4.

Choi isn’t done yet, but with three knockout losses in a row, it will be hard for him to gain momentum.

A Judoka who transitioned into an exciting striker, Kim Dong Hyun had a pretty good career.

He was a tall, rangy fighter who preferred to get in close and smother opponents with his superior grappling technique. Dong Hyun Kim was unofficially nicknamed the “Korean backpack” in his early career due to his ability to take opponent’s backs and stay there.

Standing at 185 cm (6ft 1in) in a southpaw stance, he could have given fighters fits with an educated jab and some push kicks. Even without fully using his physical gifts, he managed to best fighters like Nate Diaz, Matt Brown and an uber talented Eric Silva.

Much to the delight of the crowd, he started swinging for the fences at the tail end of his career.

I had the privilege of seeing that beautiful spinning back elbow KO of John Hathaway live in Macau.

At one point in 2014, he was ranked in the Welterweight top ten before losing to the eventual champion, Tyron Woodley.

If this list was based on who’s had the best post martial arts career, KDH would be ranked the highest. He’s gained celebrity status on the Korean talk show circuit and makes a great living off commercials.

Many people have Dong Hyun ahead of Zombie, but it’s a no-brainer to me who the number one Korean MMA fighter of all time is.

A career spanning 15 years, 10 of which were ranked in the top 10 of the premier MMA organization with two title shots. Not to mention names on his resume like Dustin Poirier and Frankie Edgar. He did get Poirier early and Edgar late in their respective careers, but the fact remains that he could have gone all the way.

He got his start and nickname by fighting like so many other Korean fighters by marching straight forward and winging power shots.

The title fight against Jose Aldo was close for a few rounds until Zombie dislocated his shoulder in the fourth. Aldo, who doesn’t rely on his grappling, mixed in some takedowns which made the fight easier for him.

He could have been champion in another era, but just happened to be around when the arguably greatest featherweight of all time in Aldo and the second greatest in Alexander Volkanovski were around. But like they say, “if your grandmother had wheels, she’d be a bicycle”.

Featherweight happens to be the toughest division after Lightweight when it comes to talented fighters.

While ethnically Korean, Choo Sung Hoon was born in Japan and opted for citizenship there.

He’s a former Judoka, who developed some serious power in his hands that led him to notable victories over Alan Belcher and his marvelous tattoo, and recently Shinya Aoki.

He also recorded a slick submission win over Melvin Manhoef, which is impressive considering the haymakers he had to dodge/absorb.

He never won the big one, but fought to close losses against Michael Bisping (had him rocked early in the fight) and Jake Shields.

He did win the Sherdog message boards for a while, because the mere mention of him would lead to a chain of Sexiyama jokes.

His post-fighting career is where he’s shined the most with major celebrity status in Korea and Japan.

Why hasn’t there been a Korean champion in UFC?

This is a complex answer that will piss off a lot of people, but it isn’t for lack of talent.

Korean fighters who make it to the UFC are among the toughest, fastest and hardest hitting, they simply don’t have the fundamentals to compete at the highest level.

Outside of some up-and-coming fighters, I’ve yet to see any who seamlessly mix their martial arts as in takedowns, knees, kicks and elbows. The style I often notice is marching straight forward while head hunting with punches.

They rarely setup strikes with feints and lateral movement and throw every shot with full power, which often leaves them gassed.

Korean Zombie had the best chance of becoming champion, but early wars, two years of mandatory military service and late development of technique (he started training outside of Korea in the twilight of his career) held him back.

Korean fighters such as Doo Ho Choi have all the tools, but are stymied by poor fundamentals like moving straight forward and back, chin up, hands down and no idea of what to do when hurt. The fight with Cub Swanson is the epitome of this where he should have clinched when Cub was throwing bombs instead of backing up with his chin in the air.

Even someone like Kim Ji Yeon had the talent to beat top fighters like Alexa Grasso, but failed to change up her style of head hunting with hands down and minimal lateral movement.

Korea is still a top-down hierarchical society where many coaches are former judokas or boxers from the regional circuit.

Nothing wrong with those sports, but MMA is a totally different animal and fighters from all around the world congregate in places like Las Vegas and Phuket to hone each other’s skills.

The word of your senior is unquestionable, which is detrimental when they’re confidently incorrect.

Regardless of Korea’s long history of martial arts culture, the country prioritizes academics over athletics and has one of the highest university enrollment rates in the world.

Most parents discourage their children from becoming athletes, especially martial artists. My cousin dreads the fact that her daughter is athletic and prefers to play sports. In fact, after elementary school, parents tend to pull their kids out of Taekwondo Academy and push them into Science and Math. Then the only thing they’ll be hitting is the books (sorry about that one).

For there to be a Korean champion, one would need to follow the lead of someone like Weili Zhang who left her homeland early in her career and trains with the best in the world.