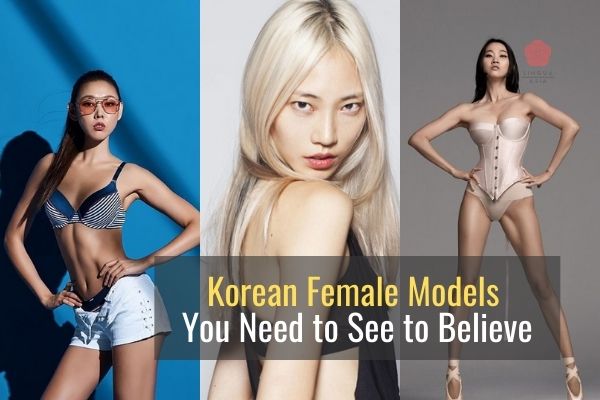 Glitz, glamour and sometimes tragedy, Korean female models are some of the most popular in Asia.

With appearances in Vogue and ad campaigns with famous brands like D&G, Louis Vuitton and Chanel, they’re making waves all over the place.

Here are the top 21 Korean female models from the past 25 years and:

While Korean male models usually get into acting, the females focus on fashion (with one major exception below!). This leads to some gorgeous print work and runway shows.

See the best 21 Korean female models of the last quarter century below.

When a 173cm tall model named “Jang Yoon-ju” debuted in 1997, the era of the “classic Asian look” had arrived in South Korea, leaving glamorous models behind.

However, it was during the IMF crisis and her contract was delayed due to visa issues. By the time things were resolved, it was already too late. She has since expressed her regret for not being able to have a career overseas.

Although she’s originally a high fashion model, she also works as a commercial model for non-fashion brands with exposure from entertainment shows.

Jang Yoon-ju is also a singer-songwriter.

With her tall figure of 179 cm, and a balanced Asian/Western look, she dominated the Korean fashion industry together with Jang Yoon-ju. She’s also famous for having a great personality, and breaking the strict military culture in the model industry with Jang.

While Jang Yoon-ju has a textbook catwalk, Song Kyung-a was a textbook editorial, building up an amazing portfolio.

Song Kyung-a is known for her unrivaled photo shoots with a variety of poses, creating amazing drama in a single photo.

Song was the first Korean female model to work in the overseas fashion industry in 2004. Even though she was an established supermodel in Korea, she started from the bottom in New York.

She wasn’t too successful since there was no demand for Asian models back then. But, she still was able to work the Armani show.

When Song Kyung-a’s overseas career ended, rumor has it in Korea that there was a female Korean model who was very hot in the fashion world. And that model was Hye Park.

Instead of modeling in Korea, she started her career in the U.S. Upon her debut, she developed a huge following.

Back then, two East Asian supermodels were the rising stars in the fashion scene: Hye Park and Du Juan. Over time, she fell behind in competition due to high demand in the Chinese market. Also, she reduced her work load after getting married.

She posed in international campaigns for big brands like Dolce & Gabbana, Tiffany & Co, and MaxMara.

Despite the short lifespan of models in the fashion scene, Hye Park maintained her top model position for 4 years.

Han Hye-jin has the perfect height and proportions for a high fashion model.

With a unique runway walk, expressions, pose and charisma, she had a great career, working with famous brands as a first-generation Korean model overseas with Hye Park.

Most notably, Han walked in the Marc Jacobs show for six consecutive seasons. She was the first Korean model in Gucci, Michael Kors and Tommy Hilfiger shows. She’s famous for being the first Asian model to walk the finale at the Anna Sui show.

Han Hye-jin returned to Korea because work in NY was backbreaking. She was deeply hurt by Kim Daul’s suicide and lost her motivation too.

Kim Won-kyung isn’t widely known to the public, but she was a model who led the “Mulan era” with Jang Yoon-ju, Song Kyung-a and Han Hye-jin.

She gained attention for her tall stature and perfect figure.

She tried to work overseas, but came back to Korea as things didn’t pan out as expected.

Kim Daul (Nicole Daul Kim) was a fashion model who led the Korean model boom in the 2000s with Hye Park and Han Hye-jin. She walked almost every big show in Milan, Paris and New York.

Kim went abroad in a different way compared to Hye Park or Han Hye-jin, as she began her modeling career in Singapore at the age of 13.

Kim Daul was the first model to go against the existing perception of Asian girls having to look like Mulan to make it in fashion.

After changing her hair color to blonde, she became the Chanel muse. She had a photo shoot for Chanel Haute Joaillerie with the photographer Marcus Gaab. It became her most iconic image.

Sadly, her success in the fashion world didn’t translate to happiness and she battled depression for years.

In 2009, Kim Daul committed suicide at her Paris apartment and was discovered by her boyfriend.

Kang Seung-hyun made her debut by winning Ford’s Model of the World title in 2008 at the age of 19.

Unlike other Asian models at the time, she had round features, so she went the commercial route, instead of high fashion.

Kang Seung-hyun walked runways, and had many photo shoots for world-class magazines.

Lee Hyun-yi is now more well-known as a TV personality, but she was a famous model in her time.

Her career took off as soon as she made her debut at a supermodel contest in 2005.

She actually majored in Economics at Ewha Womans University, and thought she wouldn’t model for long.

After getting married in 2012, she shifted her focus away from her modeling career, and started working as a model-turned-TV personality.

Kang So-young won a Supermodel Contest in 2004 and gained a lot of attention.

With a blend of Western and Asian looks, she was adored by Karl Lagerfeld.

Kang became the first Korean model to walk the Chanel show twice in a row.

She was especially beloved by one designer, John Galliano.

Since John Galliano got fired from Christian Dior for racist and anti-Semitic remarks, she had to return to Korea as well.

When South Korean models fell out of favor after the troika of Hye Park, Han Hye-jin and Kim Daul; Park Ji-hye suddenly appeared. She heralded the revival of Korean models as she landed some big jobs.

Park Ji-hye even won a campaign for Calvin Klein, which is hard to do as an Asian model.

She was the first Korean girl with a Louis Vuitton campaign.

While Korean models were a force on the runway, Park Ji-hye was praised in the beauty field as well.

She became popular for her elegant appearance.

Soo Joo Park is one of the most successful Korean models of all time.

She was the first Korean model to be the spokesmodel of L’Oréal, and to attend the Cannes Film Festival.

Soo Joo debuted at the age of 26, which is a bit late for a model.

After immigrating to the U.S. as a child, she majored in Architecture at UC Berkeley.

One day, she got a casting offer that changed her life.

With her blonde hair, which was quite unconventional, she became a new type of Asian girl. This was not without controversy, since she was preceded by Kim Daul, who sported a similar look.

Then, she worked with Carine Roitfeld, who has been a huge supporter of her career.

Kim Sung-hee is the first Asian face of Miu Miu and Prada.

Kim Sung-hee made her debut on a reality show called, “I’m a Model Season 3”.

The first 5 years of her career in South Korea were lackluster, so she lost a lot of weight and went to America.

In her international debut season, she walked the Prada runway and soon won the campaign.

She appears mainly in dramatic editorials.

Choi So-ra was the winner of Korea’s Next Top Model (도전! 수퍼모델 코리아 or 도수코) Season 3.

She made her international debut at the Louis Vuitton show. She would’ve continued the momentum from her debut, if her agency better supported her with visa issues.

The “Choi So-ra Diet” became well known to the public. She revealed her height and weight on Instagram, with her dieting method of not eating for 4 weeks and only drinking water and tea. She said she’s on a much healthier diet now, maintaining a normal eating schedule after Fashion Week.

Ironically, she had an amazing performance after losing weight. Also, by changing her style to a goth look, she secured a unique image among Asian female models.

Shin Hyun-ji was the winner of Korea’s Next Top Model Season 4. She signed a contract with IMG, worked in Korea and Australia, and started her international modeling career at 2016 S/S New York Fashion Week.

In her debut season, she walked several brand shows including Prada and Miu Miu, and became one of the top Asian models.

In the 2018 F/W season alone, Shin Hyun-ji walked a total of 42 shows, including Chanel, Louis Vuitton and Valentino. She was cast in ad campaigns for notable brands such as Chanel, Max Mara and Calvin Klein.

Shin Hyun-ji was the first Asian model to close out the main Chanel show in the 2020 F/W season.

Her first international debut wasn’t so noticeable, but she tried again and became an exclusive model for Céline in 2016.

She’s known for her unique look and intensity.

Jin Jung-sun was the winner of Korea’s Next Top Model Season 2.

She tried to debut overseas but has given up on her dreams of going international due to her height.

After winning the show, she took over the magazine and runway scene, succeeding Jang Yoon-ju.

She was the next-generation top model selected by Vogue Korea as well.

Hwang Se-on appeared out of nowhere, becoming the top model in South Korea.

She was the first Korean cover girl on Vogue Australia.

She’s also an actress among her many talents.

Ho-yeon recently exploded into global stardom after her pivotal role as Kang Sae-byeok in the smash hit, “Squid Game“. To put this fame in numbers, her Instagram followers have grown from a few million to 19 million and counting in a few weeks. She’s now the most followed Korean female actress on the platform.

The sky’s the limit for Ho-yeon. She’s already blazed a trail for future female models who want to get into acting.

Han Eu-ddeum has been quietly working editorials and runway.

Due to her short stature, she excels at photo shoots more than the catwalk.

She has since changed her career trajectory in favor of acting.

She gained the honor of being the next-generation top model selected by Vogue Korea as well.

Chloe Oh is the hope of Korean female models overseas, because there are few besides Choi So-ra and Shin Hyun-ji among third-generation models.

She lives in the States and works with Elite NYC.

Korean models are making waves in the fashion industry.