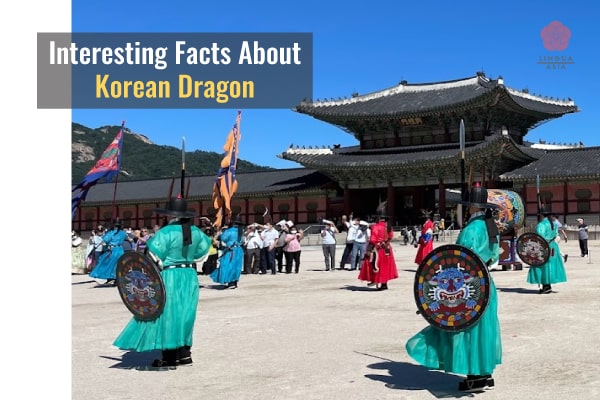 Ever wonder why Asian dragons look so different? Or, do you just like dragons because they’re kewl?

Either way, you’ve come to the right place.🐲❤

Since I was born in the year of dragon, I felt like I had to write about this! (Shout out to all the dragons out there 🥰)

Let’s check out some interesting facts about Korean dragons!

There will be numerous references to some geeky stuff that polite company might want to avoid. I recommend watching all 9 seasons of Dragonball Z and some Game of Thrones for context. You’ve been warned!

What are Korean dragons called?

You might’ve heard “Imoogi (이무기)“, but it means a large serpent with special powers that failed to or hasn’t yet become a dragon. (**I’ll give you the full story about Imoogi later in this post!)

Also, dragons are legendary creatures and one of the four benevolent animals: the Dragon, Phoenix, Turtle and Qilin (a type of mythical chimera in East Asia).

Korean dragons were created by adding Buddhist elements and a drop of Korean creativity on top of the Chinese (Asian) dragon format.

What do Korean dragons symbolize?

Korean dragons symbolize a few things that are all positive.

Yong is a symbol of:

Yeouiju is pretty much the same dragon ball that you think of from the anime. A mystical orb that grants your wishes.

In Korean mythology, a snake (Imoogi) goes through a 1,000-year spiritual training session. It then obtains a Yeouiju to become a dragon and rise to the sky.

But there’s a catch. It must hold only one Yeouiju. A greedy Imoogi will collect more orbs and can never be a dragon. It just ends up being a stronger Imoogi. I think there’s a lesson about greed here.

The supernatural power of Yeouiju is the reason why Korean dragons can fly in the sky, call the winds and summon the rains. Pretty neat stuff.

When a dragon loses its Yeouiju, it will lose its power, fall to the ground and become an Imoogi again.

So, Korean dragons are often depicted holding that orb tight in its mouth, or sometimes under its chin or even inside its brain.

Korean dragons are divine creatures and there was once a folk religion that worshiped the Dragon God (용신신앙).

It happened naturally because Koreans believed that dragons were water gods and water was a crucial part of agricultural life.

Koreans held rainmaking rituals that honored the dragon of their region (Korean dragons have their own territory), or de facto rain god.

Koreans also assume that the Dragon King (Yongwang) lives in a Dragon Palace (Yonggung) under water. Just picture the Korean version of Aquaman!

What are idioms/expressions related to Korean dragons?

What are the differences between Western and Asian dragons?

There are clear differences between Western dragons and Asian/Korean ones as shown above. They’re actually complete opposites in many ways.

Where can you see Korean dragons?

Sadly, you can’t see any real Korean dragons… But, you can visit some dragon-related attractions in Korea!

Or, you can visit any traditional Korean building like palaces or temples to play hidden object games and find dragon shapes.

Hint: Check the tips of roofs, statues on the ground, and artifacts!

When is the Year of the Dragon?

Also, babies born in 2024 will be dragons as well.

Let us know your thoughts or questions about Korean dragons!