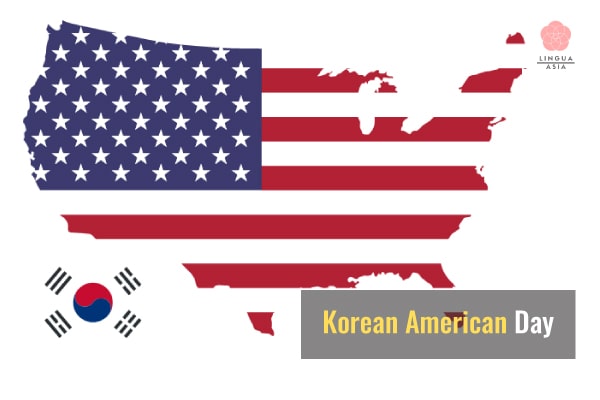 Just when you thought you heard it all comes Korean American Day.

That’s right, if you’re here now, you probably just found out or searched on a whim.

So what is Korean American Day all about? I’m here to find out first then let you know.

What is Korean American Day?

It’s a special but not often talked about day on January 13th celebrating the arrival of the first Koreans on American soil in 1903. 102 Korean immigrants boarded the SS Gaelic in Incheon in December and set foot on Honolulu, Hawaii on January 13th. The rest is history.

They paved the way for 7,500 more brave souls in the next few years who moved to a land in search of opportunity and freedom. *sniff*

Now there are around 2 million Koreans in the US and counting, the largest group outside Korea.

Although Koreans have been moving to the United States for over 100 years, the holiday itself is pretty new. Like 15 years new. That’s why I’ve grown up around Korean Americans and just heard about it last year.

Why is Korean American Day?

Why the heck not? Everyone else gets a day, why not Korean Americans?

The groundwork for this holiday was laid by, believe it or not, George W. Bush in 2003 when he commemorated the 100th anniversary of Koreans living in America. He’s actually pretty popular in South Korea. It’s fun hearing what Koreans think of American celebrities and politicians. It’s often different from what you’d expect.

In 2005, the U.S. House and Senate passed a resolution supporting the creation of a Korean American holiday. Since then, more states have gotten on board with the idea and have signed similar resolutions. We might even get a day off once a Korean wins the Superbowl!

A little bit of history:

The first Koreans in America came to work hard. Many of the initial 102 were recruited by Horace Allen, a U.S. diplomat and Presbyterian minister, from a church in Incheon. They went to Hawaii not for sun and surf but to work on sugar and pineapple plantations.

When the contract expired, half went to the mainland to start small businesses like laundry stores and nail salons. These people would set the foundation for Korean diaspora in the U.S. They also established the first Korean Methodist Church on Honolulu. This might explain why many Koreans in the states are A. hard workers and B. Christian.

The other half went back to Korea due to difficulty adapting and homesickness.

The second wave came after the Korean War and was made up of mainly war orphans, wives of U.S. soldiers and a mix of students, businessmen and intellectuals. This paved the way for the adoption of Koreans in the U.S. and is a reason why it’s common.

The third wave came after the 1965 Immigration and Naturalization Act lifted the quota that limited the number of immigrants allowed into the states. It was mainly because the country needed more skilled labor, and unlike the previous waves, this one was made up of white-collar workers.

How should I celebrate Korean American Day?

This is all pretty new, so you can totally do whatever you like! It will be cold for most in January, so something indoors should work. Here are a few ideas:

What are some Korean gifts I can give?

There’s no need to involve presents on this holiday, but if you get in a fight with your Korean significant other around this time, a small token might smooth things over. You can even wish them a Happy Korean American day too!

Check out our post about 17 Korean Gift Ideas for each Holiday and Occasion.

Let us know your thoughts or questions about Korean American day in the comments!