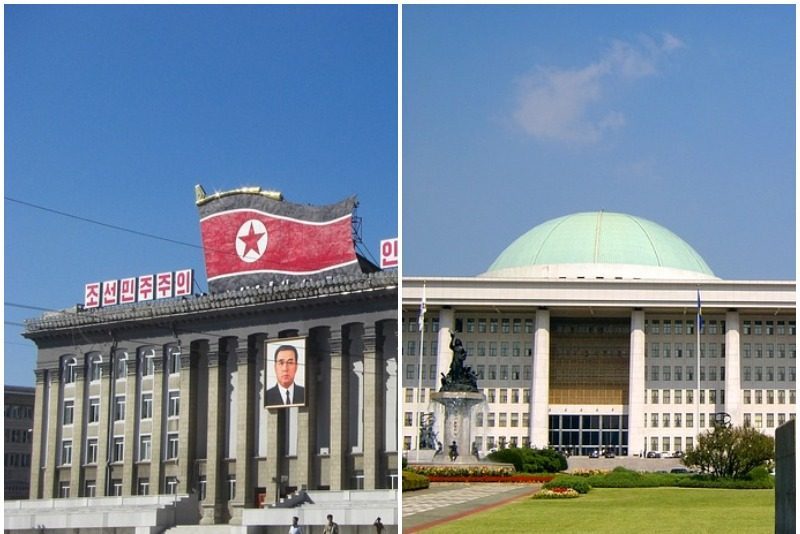 Want to know the differences between North and South Korean languages?

Koreans used to speak a common tongue, but decades of separation have led to some interesting variations.

Find out how and why the Korean language is changing.

An interesting thing happened between North and South Korea during the 2018 Winter Olympics in Pyeongchang.

After being divided for 70 years by a war that’s still ongoing, their respective Women’s Ice Hockey teams were combined less than a month before the games.

The head coach of the joint team actually had to create an English to South Korean to North Korean dictionary for hockey terms, so the two groups could communicate.

Fortunately, they managed to get along and do better than expected.

Before they became two countries, a Korean Language Society was formed to define the National Orthography(spelling system) in 1933.

From the 1960s until 2003, the leadership of North Korea created their own language system based on the soviet model.

South Korea continued to follow the 1933 rules and any subsequent amendments.

After over 70 years of separation, it’s estimated that about a third of everyday words used in North and South Korea are different.

This is a similar rate of divergence to that of U.S. and British English, which have been separated by an ocean for nearly 250 years.

Part of this has to do with a centralized effort by North Korea to regulate the language and the fact that people are prohibited from viewing South Korean media; whereas American T.V. is popular in the U.K. and vice versa.

Since the languages are becoming increasingly different, a joint association of linguists from both countries was formed to compile a South to North Korean dictionary in the event reunification occurs.

Although it’s roughly 75% complete, the effort was suspended due to increased tensions from nuclear testing and the closing of the Kaesong Industrial Complex in the North.

Although we don’t get many requests for North Korean translation, it’s fun to learn about their unique words and grammar.

Here are some interesting differences between the two versions of Korean.

There are some differences since the concepts of words have change due to socio-political factors in North Korea.

The Korean Peninsula is called Hanbando(한반도) in the South, while it’s referred to as Joseonbando (조선반도) in the North.

As mentioned above, North Koreans use the name “Joseon” to claim legitimacy over both the North and South.

Hanguk jeonjaeng (한국 전쟁) is what South Koreans call the Korean War, but North Koreans call it Choguk’aepangjŏnjaeng(조국해방전쟁) or “Liberation of the Fatherland War”.

Again, another reference to the fact that Northerners think that the South is occupied by capitalist forces.

Sohakkyo was actually used before the Japanese occupation(1910-1945), when it was changed to 보통학교, which were basically colonial slave training facilities.

After the Korean war, North Korea changed it to 인민학교, or “people’s school”.

South Korea wanted to use the same name too, but 국민학교, or “national school”, sounded better to the anti-communist government.

North Korea changed the name to 소학교 (small school) in 2002, following the trend of other east Asian countries.

In South Korea, the word for friend is chingu (친구), but in the North it’s dongmu, (동무) or “comrade”, which is a soviet concept.

Eobeoi (어버이) for instance means “parents” in South Korea, but has been altered to mean the “symbolic title of Kim Il Sung” in the North, which implies that he’s the father to everyone in Korea.

Agassi means “girl” or “miss” in the South, but it means “slave of feudalism” to Northerners.

Another interesting example is “gungjeon” or “palace” in the South, which means “large palace-like building for social activities” in the North.

This is where mass rallies are held by North Koreans.

Differences in Hangul Usage in South and North Korea

Some characters and digraphs have different names in the South and North.

Both countries use the same characters, however, in North Korea, the letter ㅌ that represents the letter T is written as ㄷ with a separate horizontal stroke on top.

Character organization is different as well.

Some letters and digraphs have different names in the South and North.

This leads to some notable differences.

It’s difficult to make generalizations regarding how both languages sound, since there’s a large amount of variation within each dialect.

Some generalizations are that North Korean sounds more old-fashioned and militant to South Koreans.

This is exacerbated by state news announcers in North Korea who sound like they’re declaring war, even when they’re reading the weather forecast.

Not surprisingly, North Koreans will often lose this accent when living in South Korea.

On the other hand, South Korean sounds smoother and weaker to North Koreans.

This means they will sound more like a “ch” sound in English.

This means that they sound more like an “s” sound.

Also, 지 and 시 can be pronounced without palatalisation as [tsi] in the Pyongyang dialect, which sound more like a “sh” sound.

For example, South Koreans typically don’t pronounce and write the initial ㄹ(r/l) and some of the initial ㄴ (n) while they’re written and pronounced in North Korea.

For example, the surname “Lee” is written as 이 and pronounced as “ee” with a short ”i” sound.

In North Korea however, it’s written as 리 and pronounced as”Ri.”

But since this pronunciation was mandated in the North during the 1960s, it’s common for older speakers to be unable to pronounce initial ㄴ and ㄹ properly, so they pronounce them the same way they do in the South.

How different is North and South Korean language?

While the two languages are becoming increasingly different, they’re still technically the same. They’re considered dialects and can be understood by speakers from both countries.

What did the North Korean language originate from?

Both North and South Korean originate from the same language, Korean.

When did North and South Korean language split?

They’re considered the same language, but they became dialects when the two countries split in 1948.

What language do North Koreans and South Koreans speak to each other?

In the rare cases when citizens of both countries interact, they speak the same language, Korean. But, they use different dialects.