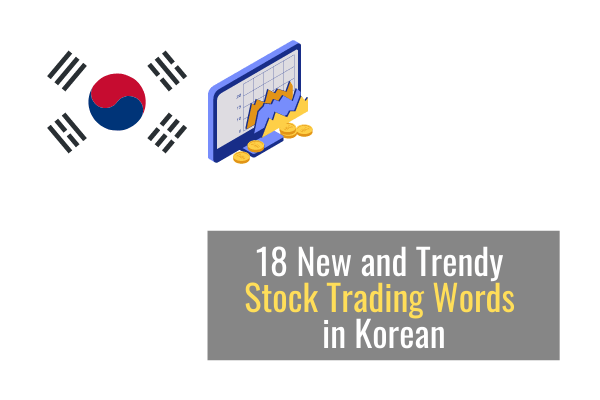 This post covers all the new and trendy stock trading slang, mostly used by the MZ Generation.

Why is stock trading trending in South Korea?

During the pandemic that started with the coronavirus outbreak in 2020, the value of the Korean Won has dropped sharply along with ultra-low interest rates in South Korea. Wealth inequality is also getting worse due to soaring asset values. The gap between the haves and have nots is only growing.

Despite the tough economic times, life expectancy is increasing thanks to advancements in medical technology.

Because of the current economic situation and longer life expectancy, investing has become more essential than ever.

However, since real estate investment is mostly reserved for Korean baby boomers due to its high barrier to entry, the MZ generation has no choice but to invest in stocks or Bitcoin.

With the rise in youth investments, many new words are being invented in South Korea.

Let’s check out some stock trading terms and new words you must know as an investor.

What are trendy new stock trading words in South Korea?

Here are 18 new expressions and their explanations!

주린이 (ju-rin-ee): A combination of stock (주식) + child (어린이), which means a beginner who recently started investing in stocks.

개미 (gae-mi): 개미 literally means “ant” in Korean, but refers to “a private investor” in this case. Koreans call small investors “ants”, because they are small but numerous, and show certain patterns with a collective mentality.

동학개미 (dong-hak-gae-mi): A private investor who buys domestic stocks, with “Donghak” derived from the 1894 Donghak Peasant Movement (동학농민운동). This word was created when Korean private investors wanted to show their power against institutions and foreign investors during the 2020 stock market crash. A modern example of this in the U.S.A. is the recent GME rally caused by the subreddit r/wallstreetbets on Reddit.

서학개미 (suh-hak-gae-mi): An antonym of 동학개미, which means a private investor who buys foreign stocks such as Apple, Amazon and Tesla.

슈퍼개미 (super-gae-mi): As you can imagine, a 슈퍼개미 is a private investor with large assets, trading at least a few billion in Korean won.

개미털기 (gae-mi-teol-gi): A combination of “ant (개미)” + “shake (털기)”, which means the act of kicking ants out of the market with a repeated rise and fall in stock prices.

평단 (pyeong-dahn): A abbreviation for average unit price (평균단가). It means the average price of your purchase per stock.

존버 (jon-buh): To hold until death, which is the equivalent of “HODL”. It means long-term investment without selling even if a stock rises or falls.

떡상 (ddeok-sang): A happy word for investors since it means “skyrocketing stock price”.

영끌 (young-kkuel): An abbreviation for “scrape up soul (영혼까지 끌어모으다)”. It means to gather everything you own and invest it in stocks, often expressed by the MZ generation in their 20s-30s who lack capital.

총알 (chong-al): 총알 literally means a “bullet”, but refers to “cash” in this situation. It means that you prepare capital in your account when you go to the stock market, just like loading bullets in a gun when you go to a war.

바겐세일 (bargain-sale): This word is used when a stock price is much cheaper than usual.

줍줍 (jup-jup): A cute way of saying “pick up (주워 담다)” in Korean. It’s used when buying stocks that have fallen a lot in price.

물타기 (mul-tah-gi): 물타기 literally means “watering”. It’s a way to lower your average unit price by making additional purchases at a lower price than the price you bought. (불타기 is the opposite of when you buy at a higher price)

야수의 심장 (ya-soo-ui-shim-jang): It literally means “the heart of a beast”. It refers to an investor with a bold mindset who doesn’t fluctuate between hopes and fears from rising and falling prices.

홍반꿀 (hong-bahn-kkul): Abbreviation for 노홍철 반대로 하면 꿀빤다, which means you’ll make a profit if you do the exact opposite of Noh Hong-chul (노홍철). (As soon as he sold a stock, its price went up by 1.2 billion won.)

Let us know which investing-related words you use in the comments!