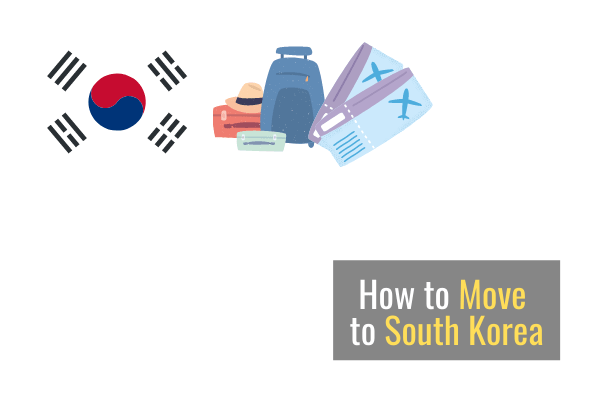 This post will make your move to South Korea easy.

I’ve moved to Korea twice (2006 & 2020) and collected inside tips from locals and expats over the years.

Congratulations on moving to Korea! You’re about to set off on a journey that few are brave enough to attempt.

Korea is a land of extremes, so a little preparation will go a long way. But don’t worry, it’s safe and lots of fun.

More about Why You Should Live in Korea

Read on to find out more!

What to Know Before Moving to South Korea

YOLO is the mantra of people in their 20s and 30s. You can enjoy things like camping, hiking, snowboarding/skiing, wakeboarding, surfing and pretty much anything you did back home.

Even glamping, weightlifting and tattoos became trendy all of a sudden in 2019.

Korea is modern on the surface, but traditional on the inside.

Life is fast-paced, especially in Seoul. If you want a more laid-back experience, try moving down south.

More about How to Survive in Korea as an Expat

K-pop and K-dramas are not accurate representations of what life is like in the country.

Korea is becoming more international every year, despite its conservative values.

Make sure to get some non-Korean food a few times a week. There are plenty of international restaurants now including European and Asian cuisines as well as Turkish, Brazilian, Mexican and South African.

Trains, subways, buses and taxis are all linked with one transportation card (T-Money) all over the country. You can take a train in Busan with the same card you use in Seoul.

Everyone takes the bus, so don’t worry about not having a car.

Online shopping is amazing with same day grocery delivery and tons of affordable clothing options (as long as you enjoy Korean styles).

You can find all major clothing brands (H&M, Zara, Giordano, Levis, Nike, etc.), but the sizes might be different.

Korean apps are great and allow you to do cool things like banking, shopping, calling taxis, messaging, sending gifts, etc. They’re a must for living there.

South Korea has four seasons and counting. Spring and Fall make you love being in Korea, but they’re getting shorter each year. You’re going to need lots of warm and cool clothes.

Winter is a great time to use those vacation days (*ahem* Bali, Southern Thailand and Cambodia are nice that time of year). January after New Year’s and before Seollnal(Lunar New Year) is a good time to travel.

There’s nothing better than when winter ends in Korea and people start getting lively.

Summer can be tough with temperatures going up to 35 degrees Celsius (95 degrees Fahrenheit). You’ll love the many air-conditioned cafes.

You’ll need some comforts to help you relax in your downtime. Feel free to pack some fun or sentimental items.

Keeping an open mind while balancing your needs is an important skill to develop.

Social pressure can be strong at work, so don’t be afraid to say “no”.

Air quality is not great, so investing in a second-hand air purifier will do wonders for your well-being.

More about How to Survive in Korea

Always remember your “why” for going abroad. For me, it was to learn the culture and gain new experiences. For others, it’s to save money for travel. Whatever the reason, it can get you through tough times.

Where to Live in South Korea

A sprawling metropolis that is both the capital and the largest city with 10 million people.

Shinchon/Ehwa/Hongdae: Younger college towns that are next to each other. Perfect for people in their early 20s.

Itaewon/Gyeongildan/Haebangchon: The foreign districts with plenty of international food options and a small, tight knit community of expats. Perfect for those who want to be in a foreign country only part of the time.

Myeong-dong/Dongdaemun: There are places to shop everywhere, but these two areas have the most options. Perfect for shopaholics who don’t mind being in a crowd.

Daeghak-ro: The artsy district with heaps of theaters and galleries. Perfect for the art lover.

Jongro: An older central part of the city where, you guessed it, older people like to be. Perfect for people who want to experience more traditional culture.

Yeouido: The business/finance district. Perfect for those who want to network with locals and teach adults.

Gangnam/Apgujeong/Shinsa: The wealthy but incredibly crowded part of the city. You’ll see the most attractive people here. Perfect for those who want to get some high-paying private lessons on the side.

Jamsil: Lots of stadiums and amusement parks. Perfect for those who come with a family.

More about Where to Live in Korea

An old port city down south with access to the beach. It has the second largest population. People speak a different dialect that you may or may not want to learn.

Bonus cities nearby: Changwon and Gimhae

More than just the airport, Incheon is a city with just under 3 million people.

A large city that prioritizes education.

The food capital of Korea. They take pride in what they eat.

The Hawaii of Korea that has its own unique culture and dialect.

What to do Before Moving to South Korea

Get the right job

I can’t stress this enough. Your job will make or break your experience in Korea.

More about Getting a Job in Korea

Like many new arrivals, I loved the country and my work when I first came, but was at odds with management.

Pimsleur is the language program I wished I knew about before going to Korea. I used it later to become conversational in Japanese in 90 days.

Or you can at least learn how to read and count.

The Metric system (Celsius, meters and kilograms) will also be helpful.

Do your research online

You’ll get a wealth of knowledge on many topics not covered here.

Some of the comments are biased and overly negative, so use your best judgement. It’s easy to develop an us vs them mentality if you read too much. Happy people don’t tend to comment online. I recommend finding out what you need and muting the Facebook groups.

They will drug test you a few days after you arrive during the health screening. You’ll want to avoid pain medication as well, since it could show up as a false positive.

Essentials for Moving to Korea

Thick winter clothing (expensive in Korea and sizes will be different)

Shorts, both casual and exercise

T-shirts, hats and swimwear (you can find these, but not always in the brands you like)

Electronics (more expensive in Korea on average. Even local brand items like Samsung phones will cost more there.)

New pairs of running, dress shoes, and flip flops (Korean shoes are expensive and might not fit)

Melanin (not sold in Korea)

Multivitamins (not sold in bulk and are expensive). Places like Olive Young have Blackmore’s multivitamins and other local brands.

Health supplements are expensive and hard to find. Some supplements such as CBD are illegal without a prescription, so do your research beforehand.

220 volt plug adapter (you can find these in Korea, but it’s easier to bring your own)

Your favorite spices (something simple like Lawry’s, Chipotle, or nutmeg can stave off homesickness)

Loose tea leaves in bulk. They don’t have many options besides local varieties.

Scents like diffusers or oils that you like, but you can easily find Yankee Candle and Jo Malone in Korea.

Snacks like Milka, Vegemite, Reese’s, Cheetos and Cliff bars. The Korean versions are different (usually sweeter) and hard to find.

Your favorite card or board games

Pictures of family and friends

Books in English you plan on reading (due to the high demand for English content, they’re marked up considerably)

Bose Noise Canceling Headphones QC35 (there can be a lot of noise pollution, so it’s nice to remove it at home or on trips)

English Villages: They look and sound great, but they’re often a nightmare to work at. Some have described life in them as similar to that of Dubai or North Korea.

Basement or rooftop houses: They may seem quaint and rustic, but they’re teeming with mold, insects and other unsavory characters.

Negative Expats: There are many happy expats in the country, but there are pockets of negativity you’ll want to avoid. If you notice that a group you’re with spends most of their time complaining about the country, it’s probably time to find a new one.

Rush hour: Just don’t. You’re probably not used to being crammed in with so many people in a hurry. Most work schedules (English teaching jobs) avoid this time. Try to minimize it by living close to work.

What to Get in Korea

While we highly recommend bringing all your clothes, Korea has some really cool items that you can’t find elsewhere.

Phytoncide (피톤치드) spray: Natural insect repellent and deodorizer. It makes you feel like you’re in a forest.

Garglin (가그린): Mouthwash engineered for the spices in Korean food. Check out Thera Breath if you want to be extra sure.

Mask packs (마스크팩): They’re great for skin care and cost about 1-2 dollar each, so you can use them almost every day.

K95 masks: Comfortable and cheap for days when air quality leaves something to be desired.

Umbrella: You can find them everywhere.

Dermatological Skincare (피부과): Cutting edge and inexpensive. For example, 1-hour professional acne care costs about 50 dollars. Fillers cost about 30-100 dollars, but can be addictive. Check out “events” (they always have 이벤트 for discounts) at your neighborhood dermatologist’s office.

Medical and Dental Care (의료 및 치과): Convenient, fast and affordable. If you have Korean public insurance (건강보험), teeth scaling is about 10 dollars once a year, or 60 dollars without insurance.

Eyelash Extension (속눈썹연장): Price is about 30-50 dollars for highly-skilled service.

When should I move to Korea?

Early Spring around mid-March is ideal. It gives you plenty of time to settle in and enjoy the best season of the year.

Where should I live in Korea?

Somewhere not too crowded and away from large streets is a good idea. Google Maps offers a street view of some parts of Korea. Naver Map can fill in the blanks. We cover different cities above in detail.

Where do expats live in Seoul?

They live all over the place, but they tend to congregate in the Itaewon (including Gyeonglidan, Haebangchon, Hannam and Yongsan) and Gangnam areas.

How much money do you need to move to Korea?

Not much if you get a job first. Many teaching jobs offer a free flight to Korea (and return if you complete a year) and accommodation.

Can you move to South Korea without knowing Korean?

Yes, many locals speak English and even more understand it. It’s still a good idea to learn the basics before going to have a better time.

Korea is a great place to move to as an expat.

Let us know what your favorite moving tip is in the comments!