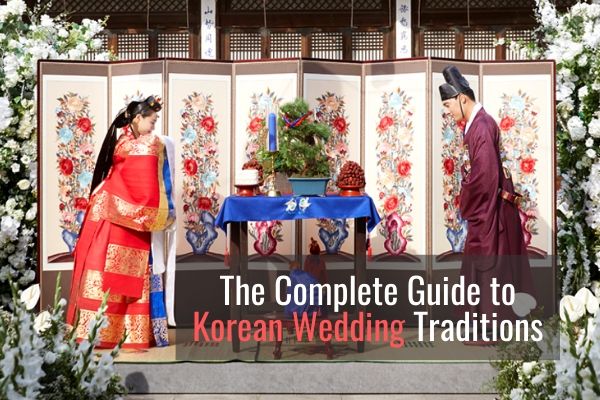 This post covers everything you need to know about about Korean wedding traditions.

It includes what to expect at the ceremony and how to have your own Korean wedding.

How long are Korean weddings?

Korean wedding ceremonies trace their origin to the Koryo period in 918 AD and used to last 3 days. This fell out of favor during Park Chung-hee’s reign. With the goal of growing the economy, a three-day party seemed like a waste of productivity and resources. So the process was shortened to 30 minutes.

Now, toned-down traditional ceremonies are making a comeback. You can expect the ceremony to last 30 minutes to an hour while the reception can last a few hours.

Who chooses to have a Korean traditional wedding?

Anyone can have a traditional Korean wedding ceremony. But, they’re usually held by international couples or incorporated in weddings overseas.

There are several theories behind them.

The first one is that the dots chase away ghosts since they hate red color, and keep the wedding sacred.

The second one is that they’re a symbol of youth or virginity.

Also, during the Han dynasty in China, court ladies applied red rouge made of safflower on their faces to indicate menstruation. Later, it was applied to cheeks, lips and nails for cosmetic purposes.

Where can I have a South Korean traditional wedding?

Fortunately, there are many places that hold such events. Believe it or not, having a tradtional wedding is cheaper than getting married at a wedding hall. Here are a few of the more popular ones:

What to wear to a traditional Korean wedding ceremony?

Brides will wear a colorful hanbok.

Grooms will wear hanbok for men.

For the wedding party

Depending on the role, your clothes will differ. Parents will wear hanbok, even at modern weddings. Other family members might also wear hanbok, such as aunts.

If you aren’t in the wedding party, you can wear modern formal clothes. Suits for men and formal dresses for women.

Gifts are a vital part of Korean culture. Close friends of the bride and groom will give something for the home like a talking rice cooker or TV. Everyone else can bring cash in an envelope. The amount can vary from 30,000 KRW for acquaintances to 100,000 KRW for old friends.

What does a Korean traditional wedding dress look like?

These colors represent harmony between men and women, and the universe of yin and yang.

In the past, this was the most important part of the process. Weddings used to be arranged for economic or status reasons. During the Joseon dynasty, brides and grooms wouldn’t meet until the day of the wedding.

There’s a fun tradition of exchanging gifts before the wedding where a group of the groom’s closest friends show up at the bride’s family home wearing dried squids as masks. They chant “hahm for sale” while bearing gifts in a box called “hahm” until the bride’s family meets them outside. There’s usually some light-hearted negotiation until the gifts and money are exchanged. The bride’s parents will sometimes lay down a trail of cash in envelopes to lure the men to their house. It’s a lively and boisterous affair that allows both parties to blow off some steam.

As you might have noticed, Koreans love their music and drama. Before the wedding begins, there’s usually a traditional performance (사물놀이, or Samulnori) by a band of 4 musicians who dance and play instruments. They wear colorful costumes and hats with long ribbons attached that they twirl while playing their instruments.

Depending on the budget of the wedding, there might be a traditional performance with fans called buchaechum (부채춤). This is usually done by young women in hanboks and traditional makeup. It’s a very graceful and beautiful sight to see. I highly recommend checking it out.

The ceremony itself is surprisingly short. It can last anywhere from 30 minutes to an hour.

The first part of the ceremony is known as Jeom-chok Rye. The mother of the bride and the mother of the groom light candles to invite the god of Heaven to the ceremony. There’s usually a red and blue candle and the two mothers will bow to each other as a sign of respect. This may appear to be a somber affair, but don’t misinterpret the lack of smiling as a sign of dislike.

Next, the groom enters with an attendant who is carrying a wooden goose. In the past, they would use a real goose. But since everyone lives in an apartment now, there’s not much use for a live one. Then the bride’s father meets the groom.

Now the groom presents the goose to the bride’s father at a small table on the ground. Geese symbolize 3 virtues in Confucism, which Korean culture is partially based on.

The bride walks down the aisle with her attendant and stands next to the groom.

Now the couple faces each other and take turns bowing deeply with palms on the floor. The groom traditionally bows twice while the bride bows six times. Why the lopsided number? This goes back to the hierarchy portion of Confucianism with the husband positioned at the head of the formation, while the wife follows.

The couple-to-be washes their hands while the assistants attend to them. Hand washing symbolizes the purification of mind and body before the ceremony.

Alcohol is a big part of Korean culture as evidenced by this next part. The couple pledges to the heavens that they’ll be faithful to each other and fulfill their obligations as husband and wife. This is sealed with a cup of wine that’s first raised to the sky and poured on the ground. The process is repeated twice. The cups are filled once more and the couple repeats their pledges and this time takes a drink. A gourd split in half (표주박)with both halves filled with liquor are also drunk. This symbolizes the uniting of two people as one.

Finally, the couple turns and faces the attendees and bows deeply to the ground once more.

Now’s the time for the wedding party to get their money’s worth for the photographer. Expect to take various group pics with the bride and groom.

Before the wedding reforms in the 1960s, the after ceremony party would last days. Now, it’s usually a 2 hour buffet with open seating. The only mandatory dish is noodle soup (국수). This symbolizes a long, prosperous life. Ddeok (떡) or rice cake will also be present.

What is the Pyebaek ceremony?

폐백 (Pyebaek) is a Korean tradition that’s held after the wedding ceremony.

Originally, it was an opportunity for the bride to formally greet family members at the groom’s house.

Nowadays, the tradition is simplified and any family member can participate as long as they prepare 절값 (pocket money in an envelope to pay for bowing, which usually ranges from 100 to 300 USD).

Even when Korean couples have a modern ceremony while wearing a wedding dress at a wedding hall, they still have Pyebaek with Hanbok right after.

There are 5 essential food/beverages to be on the table for Pyebaek as below:

Also, there’s a custom that newlyweds bite a jujube in half together.

There’s a myth that says the person who gets the jujube seed will have the upper hand.

Traditional Korean wedding ceremonies are a fun event that you should experience.

Most of my Korean friends have modern Korean weddings. But I’ve been lucky enough to attend a few traditional ceremonies.

As a Korean, it was nice to see the actual ceremony in person, since I had only heard about them previously.

Just because you’re not Korean doesn’t mean you can’t have a Korean wedding. It’s a unique tradition that anyone can enjoy.